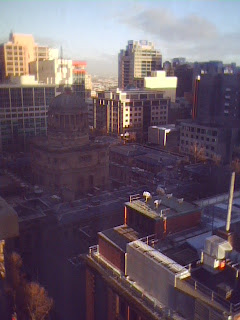 So here we are in Melbourne. Arrived yesterday morning. Air New Zealand's service was, as always, excellent, although I can't help thinking the seats are a little smaller every time I fly. They're shrinking the seats, right? It's not me getting wider. Ran into Kevin Maclean at Auckland airport who assured me that yes, the NZ Worldcon bid in 2020 is very much real. So this is me putting my hand up to volunteer for - well, whatever I can to make that happen. Worldcon in New Zealand would rock.

Because everything is bound to go wrong just before our first overseas trip in years, we don't have a camera. Liz turned it on a few days ago and something's broken inside. There's a big crack on the display but it's not a crack, it's a picture of a crack. I don't know. So we're reduced to using the cameras on our phones. They're better than the previous phones but still the photographic equivalent of paintings on a cave wall.

Oh but yesterday was long. I shouldn't complain - it's not like we've come all the way from the US, but Liz and I were both exhausted from getting the kids (and the house) ready before we left. Couldn't check in to the hotel until 2, so we went for a wander round the shops. Melbourne looks beautiful. I'm expecting it to be even nicer now the rain's stopped.


Internet access is, of course, ridiculously expensive in the hotel. But McDonald's has free Wifi that seems to work pretty well. I think we'll be having McDonald's for breakfast quite often. Seriously though - why doesn't McDonald's offer free Wifi in New Zealand? The restaurants are absolutely packed here and every single person has a laptop or smartphone. They're not there for the burgers, but they're still selling. Apparently Gloria Jeans and Starbucks also offer free wifi. Guess you have to pick your faceless foodcorp of choice. And I don't know what it's like here, but in New Zealand a McCafe coffee absolutely kills a Starbucks one every time.

Our mobile phones are working as advertised. Thanks Telecom. Calls are expensive, as is texting, but it's great to be in contact. We spoke to Emily while sitting at a restaurant last night and we've got a phonecard for cheap calls in the hotel. We're missing the kids terribly, but it shouldn't be too hard to keep in touch now. I have wondered about getting a prepay SIM for my phone and tethering it to the netbook. The hotel Internet is so expensive, I wouldn't be surprised if I could do it cheaper with a mobile solution. Might look into that today. If anyone's got any other communication advice, let me know.

So today's the start of Worldcon. I really have no idea what to expect, having only been to one tiny con before. Adfer our delicious McDonald's breakfast (Hm. Wonder how healthy I'm going to feel after a week of doing that) Liz and I will wander over the Yarra. I'll hopefully sign in, then we head to the art gallery. There's an exhibition of old masters. Don't know what sessions I'll be attending this afternoon, though after reading all 3700 pages of The Dark Tower this year, I will have to go to the Stephen King lecture.

We're at the Medina Grand, way up on the 17th floor. Small room, but a nice place to be. There's a pool and a gym and I think I'm going to have to take advantage of both, especially if I'm hitting the McDonald's so much.

Wish I was there! Have fun!

Yay! Hope you have a blast!

Wow, Grant. I think I have a picture of the exact same view! How funny. Hope you have a great time. Wish I could be there too of course.