Steam ruminations (or, that's what I've been trying to tell you)

Sometimes you wake up and everyone's banging on about something. I think today is international steampunk day.

First, this item on Campbell last night about the Weta originals ray guns, developed by Greg Broadmore. Emily turned to me afterward and asked if we could buy one. And I'd love to, but they're not cheap. Guess we'll have to stick with our current home defence system a little longer. To be fair, no burglar has ever got past our fierce disco pirate and princess mermaid troubadour combo thus far. 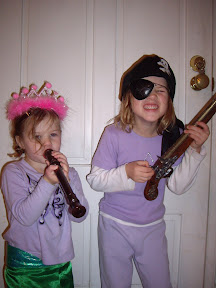 Then this morning on The Book Show, an interview with Jeff VanderMeer about the new steampunk anthology and steampunk in general.

And it was while listening to Jeff talk about the adventure and political elements so engrained in steampunk that I wondered if steampunk could be the ultimate scifi gateway drug. I mean, who doesn't love a zeppelin, a fur-lined coat and a well turned leg inside the jackboot of empire?

Adventure is interesting. I've been thinking lately that what I really want to read (and write) is more of that sort of thing. Steampunk, a new pulp, the resurgence of sword and sorcery in its shorter form (you have read Sir Hereward and Mister Fitz go to war again, haven't you?), or the mind-shredding awesomeness of Kim Newman's Diogenes Club books.

I don't know. I can't articulate it particularly well at the moment. Ruminating. But more zeppelins are definitely part of it.


I got Billy Bragg's new one, Mr. Love & Justice from emusic a while back. It didn't grab me immediately like his earlier albums, but after a few more listens, I'm convinced. This is absolutely classic Bragg, and it's a real earworm -I've woken up three days running with it playing in my head. Here he is performing one of the new tracks at SXSW

Email ThisBlogThis!Share to TwitterShare to FacebookShare to Pinterest
Labels: who doesn't love a zeppelin a fur-lined coat and a well turned leg inside the jackboot of empire?