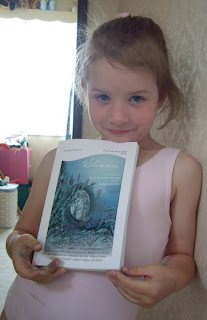 OK, so my pace is glacial. But I've only been taking this writing thing quasi-seriously for a couple of years and I'm pretty pleased with what I've achieved so far. I've also been reading slush, which eats into my writing time, but is very educational. Often you can't see an error in your own writing until you've seen it somewhere else.

The high point for was seeing my first story in print in the pirate issue, modeled by Emily above.  If you haven't already checked it out, you need to - every story is great. (And I hope it's not a spoiler, but every one has pirates in it).  Working with the Shimmer crew and cap'n Adams was a privilege.  And look - there's a new interview with the man himself here.

Other excitement this year- I got my first 'Alas' from Gordon Van Gelder, no doubt the first of many. Is it weird that I don't mind the rejections?  None this year have been form letters and most contained encouraging comments.  I think this is a Good Thing.

Since it was published last year, "Hard Times for Bartleby Crow" is eligible for this year's Sir Julius Vogel Award. If you liked it, feel free to nominate me here.

What's next? Lots more writing. Those unfinished stories are going to be completed, which should give me far more completed this year (forgive me father Heinlein, for I have sinned: I have not been following your second rule). There will be sequels: I'm currently back in the Bartleverse. Also working on a sequel to another story that has not seen print yet, with at least another two in the pipeline.

If I end up in your slush this year, expect to see: Zombies! Zeppelins! Fairies! Space worms in need of trepanning! Aging rockers on their farewell tour! Pigeons! I know, it all sounds so cliched. But dammit, I want to write my pigeon story. And for those of you who prefer drama - there's sport.

Depending on the progress I make in the first half of the year, I may attempt my first novella. Since my short stories don't seem to stay, you know, short, I might as well see how far they run.

This probably means I'll be light on the blogging. But I can always fake it by throwing up videos every few weeks. And since this post is all about my writing, perhaps this. I'm pretty sure most of my ideas come from a caravan this guy set up in my brain years ago.

But hey, this entry isn't just about me.  Look: The Smurfs are worth four billion dollars!
Posted by Grant at 9:23 pm

awwww! What an adorable picture!