I read a lot of books when I was a kid. Watched a lot of TV, too, and spent a surprising amount of time drawing maps of fantasy kingdoms. All of that was secondary though, to what I was obviously put on this earth to do.

It was obvious that reading comics was my destiny. I knew exactly how to whine when my mother took my brothers and I into the local newsagent. It paid off - they reserved a copy of Whizzer & Chips for my brother every week. I got Buster . They were OK, but really just kids stuff.

Then finally,  for 22 glorious issues, Starlord! Here was the good stuff - Strontium Dog, Ro-Jaws & Hammer-Stein (Ha! Only just now did I get that!), Planet of the Damned. These were the stories that set up residence in the empty and still-growing hall of ideas, the ones that would form the foundation that everything and everyone else - Marvel, DC, Stephen Donaldson, Stephen King, Dungeons & Dragons, would build on top of. It could be said that without Strontium Dog I wouldn't be the man I am today.

Later on I discovered the treasure house that was the Church Corner Book Exchange. Here was where I could stock up on my Marvel favorites - Thor, Captain America, Power Man and Iron First! Sure, some of them were torn, some were years out of date and there was no way to read them in order, but they were cheap enough that even with my meager pocket money I ended up with an impressive collection. No, I don't know where they are today. Probably hanging out with my Star Wars Lightspeeder and my D&D basic box set (come back guys).

Apart from the Fleetway funnies, comics were something my parents weren't that interested in. They certainly didn't buy many for me, nor the Christmas Annuals (although I do seem to remember having a Starsky & Hutch annual, even though I'd never seen the show).

Then one evening Dad came home from work with a brown paper bag under his arm. "You'll like this one," he said. "It's a New Zealand comic. And it comes with a watch!"

It was Captain Sunshine. 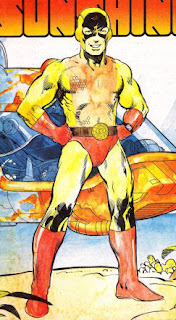 The watch? It was solar powered, I think. Had a sundial on it. I don't think I ever figured out how it worked. And it was a pretty good comic, from what I can remember. Certainly I remember waiting eagerly for the next issue. And waiting. And waiting.

And here's where Google can really mess with your childhood. I didn't know until I started researching this post that the sundial wasn't some small giveaway, the kind they'd have with 2000AD every six months or so. Actually, the comic was designed to sell the watch. Apparently 100,000 copies of issue one were printed, but funding ran out before issue two was completed. 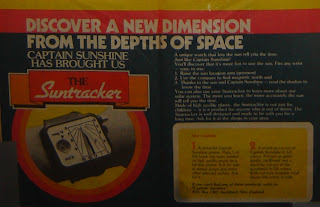 There's a little more information at comics.org.nz, but not much. Bob Temuka's blog has a little more and his memories are eerily similar to mine. Even after all these years, I can still recall lying on the carpet, on a summer morning, reading New Zealand's first superhero comic.

The creator, Colin Wilson, went on to draw Judge Dredd for 200AD, along with many other things. Captain Sunshine, however, remains lost in time, like Captain America frozen in Alaskan ice. Hardly any images online, no scans of the pages - he's practically ungooglable.

But he was there. I remember. You do too.