So much book news lately:

The British Library has some original manuscripts in a virtual exhibit, the latest being Alice in Wonderland.

From Boing Boing, the news that James Patrick Kelly has released audiobook versions of some of his stories via creative commons, as was the style at the time.

There's an excerpt from Neil Gaiman's new book Anansi Boys, over on his site.

If you're in Auckland, the Howick Rotary Club are collecting books for this year's Bookarama. More books than you could possibly read, and only 30% of them are James Michener. On sale September 29 - October 1.

And even closer to home, the first piece of software Liz and I bought for our new baby (who doesn't look like the other kids, btw) was delicious library. If you have a lot of books, if you have an entire room to hold your books, if you find you have to double-shelve your books because there's just not enough room, you need this software. It looks like this: 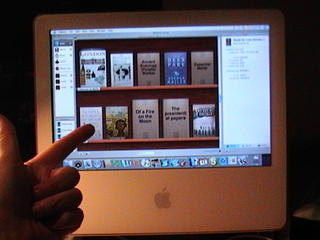